Damn Nice Few Days Out There

We had Good couple of Days of Fishing, Nice catches of Gaffers are still to be had.  But in the Coming Weeks these Gaffer Dolphin will pull their Amazing Shrinking Act.  They will Turn To Bailers as the Summer Continues on.   They are Still Great Tasting just a little Smaller.  But with the Dolphin going one way the Wahoo will go the other we should see nice Wahoo Catches and their Size will increase.   Last Years largest Wahoo went 98 Pounds, lets see who is gonna get this years largest.

Bill Fish are around with the Most of them Being Sails there have not be many Blues so far this Year.  There have been some, just not as Many as in Prior Years.   Bottom Fish are all Over to be had and can help your day out when your target Species just is not Cooperating.  Triggers are always a Crowd Pleaser.

InShore Fishing has been going off for Weeks now and the Cobia are Still here to be had.   Just Brush up on the New Regs and you will be all set.  We have a Few Spots in the Sound that we can send you to.  The last Group of Folks I have sent Down there came back with fish to weigh in and smiles on their faces.

Beach Fishing is Picking up and there have been Great catches of Drum of all Sizes off of Ramp 55.  There has also been some real nice Pompano and Sea Mullets.   A few Blues Here and There, Spanish just out of Reach.

William Volland of Va Beach had a SailFish while fishing aboard the BlueFin.

Nolan Hittle of Zanesville Oh had a SailFish while fishing aboard the BlueFin.

Richard Baxter of Wayensboro Pa had a 35 Pound Dolphin.

Steven Clemens of Lansoale Pa had a Blue Marlin while fishing aboard the Marlin Mania.

Gracie Hearne of New Bern NC had a 45 Inch Drum While Fishing aboard the Bak-Bar.

Mickey Hearne of New Bern NC had a 42 Inch Drum While fishing aboard the Bak-Bar.

Mason Shelby of Chester MD had a 35 pound Dolphin.

Dean Townsend of Salisbury Md had a SailFish while fishing aboard the BlueFin. 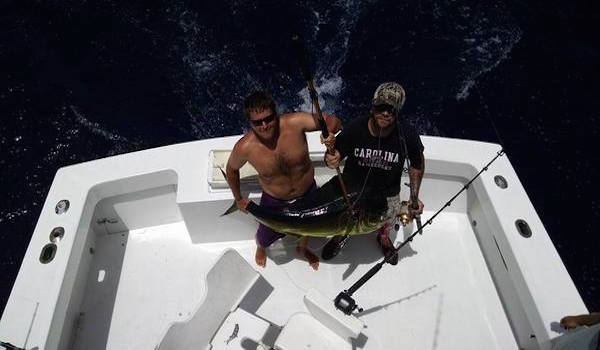